Pubs and Progressives : Reinventing the Public House in England, 1896-1960 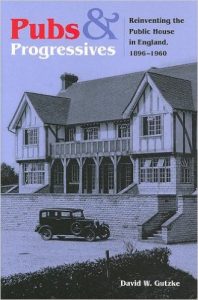 No self-respecting Victorian lady would enter a British pub, a florid drinking den where working men guzzled pints of beer. When brewers, inspired by the Progressive belief that the physical environment influenced moral behavior, turned to the problem of working-class drinking during the interwar years, they set to work reinventing the pub itself.

Acting on a genuine belief in the possibility of social betterment, reformers found ready allies among not only government officials but religious leaders, social workers, journalists, the landed classes, even the royal family. In the process, brewers sought to undermine the stigma against pubic drinking and attract a broader clientele.

Their Progressive ideas shaped the emergence of an ‘improved public house’ that blurred distinctions among pubs, on one hand, and up-market hotels, restaurants, and roadhouses, on the other. Outside, cheerful gardens, children’s playgrounds, and bowling greens greeted delighted customers. Inside, brewers wooed new patrons with meals, music, dancing, and live entertainment. Tea or entertainment rooms beckoned men, women, and even families; couples found intimacy in the new stylish lounge.

In this astonishing story of the transformation of the pub, Gutzke draws on an array of sources and methods from gender studies, cultural history, literature, architecture, and urban planning, without neglecting the crucial role of ideology, economics, and politics. This broad-based study, which includes numerous illustrations, will appeal not just to specialists but to anyone interested in the history of a pivotal English social institution.

David W. Gutzke is Professor of History at Missouri State University and former President of the Alcohol and Temperance History Group.

Introduction
1 Transatlantic Progressivism
2 Missionaries behind the Bar
3 The Carlisle Experiment
4 “Fewer and Better” in Birmingham
5 Brewers and the Progressive Spirit
6 Building Coalitions
7 Return of the Licensed Victualler
8 Gentrifying the Pub
9 Familiarity Breeds Content
10 Bricks, Mortar, and Beer
11 A Contested Legacy