The Hungry Gene : The Science of Fat and the Future of Thin 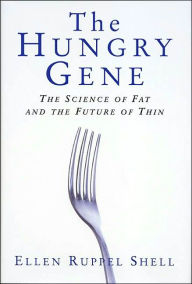 “In a blend of erudition and entertainment, acclaimed science journalist Ellen Ruppel Shell reveals for the first time the secret history and subtle politics behind the explosion of obesity in the United States, and the world. Shell traces the epidemic’s legacy to the Ice Age, its rise through the Industrial Revolution and the early days of medicine and into modernity. She takes readers to the front lines of the struggle to come to grips with this baffling plague – from a modest laboratory in Bar Harbor, Maine, where superobese mice were first bred, to Rockefeller University in New York City to witness the cutthroat – and heartbreaking – race to clone the obese gene, to the far-flung tropical islands of Micronesia, where a horrifying outbreak of obesity among native islanders has helped scientists tease out the disorder’s genetic and evolutionary roots.” The Hungry Gene offers an unflinching insider’s look into the radical and controversial pharmacological and surgical techniques used to combat what drug makers have dubbed the trillion-dollar disease, exposing the collusion between scientists and industry that for so long muddied the waters of obesity research and endangered untold thousands of unwitting victims. With vivid portraits of the scientists involved, Shell illustrates the breakthrough that proved conclusively that obesity is not a matter of gluttony or weak will but of vulnerable genes preyed upon by a hostile environment. Ultimately, she takes aim at the increasingly obesity-enabling culture that lies behind the crisis, telling the hard truths of what must be done to turn the tide on this frightening pandemic.