Sugar and Spice – Grocers and Groceries in Provincial England, 1650-1830 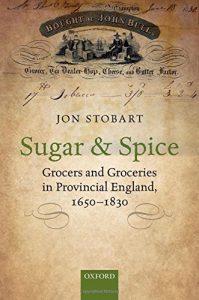 Consumers in eighteenth-century England were firmly embedded in an expanding world of goods, one that incorporated a range of novel foods (tobacco, chocolate, coffee, and tea) and new supplies of more established commodities, including sugar, spices, and dried fruits. Much has been written about the attraction of these goods, which went from being novelties or expensive luxuries in the mid-seventeenth century to central elements of the British diet a century or so later. They have been linked to the rise of Britain as a commercial and imperial power, whilst their consumption is seen as transforming many aspects of British society and culture, from mealtimes to gender identity. Despite this huge significance to ideas of consumer change, we know remarkably little about the everyday processes through which groceries were sold, bought, and consumed.

In tracing the lines of supply that carried groceries from merchants to consumers, Sugar and Spice reveals how changes in retailing and shopping were central to the broader transformation of consumption and consumer practices, but also questions established ideas about the motivations underpinning consumer choices. It demonstrates the dynamic nature of eighteenth-century retailing; the importance of advertisements in promoting sales and shaping consumer perceptions, and the role of groceries in making shopping an everyday activity. At the same time, it shows how both retailers and their customers were influenced by the practicalities and pleasures of consumption. They were active agents in consumer change, shaping their own practices rather than caught up in a single socially-inclusive cultural project such as politeness or respectability.