A Taste of Power : Food and American Identities 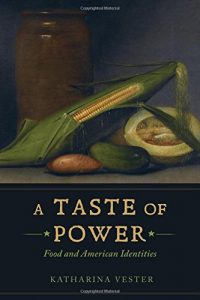 Since the founding of the United States, culinary texts and practices have played a crucial role in the making of cultural identities and social hierarchies. A Taste of Power examines culinary writing and practices as forces for the production of social order and, at the same time, points of cultural resistance. Culinary writing has helped shape dominant ideas of nationalism, gender, and sexuality, suggesting that eating right is a gateway to becoming an American, a good citizen, an ideal man, or a perfect wife and mother.

In this brilliant interdisciplinary work, Katharina Vester examines how cookbooks became a way for women to participate in nation-building before they had access to the vote or public office, for Americans to distinguish themselves from Europeans, for middle-class authors to assert their class privileges, for men to claim superiority over women in the kitchen, and for lesbian authors to insert themselves into the heteronormative economy of culinary culture. A Taste of Power engages in close reading of a wide variety of sources and genres to uncover the intersections of food, politics, and privilege in American culture.

1 • “For All Grades of Life”: The Making of a Republican Cuisine
In Search of an American Cuisine: National Identity and Food
“All My Bones Were Made of Indian Corn”: Maize, Revolution, and Democracy
An American Painter’s Palate: Raphaelle Peale’s Food Still Lifes
Domestic Virtue and Citizenship in the Work of Lydia Maria Child
“Bread of Our Mothers”: Sylvester Graham and the Health of the Nation
Cooking Contest: Regional, Transnational, and Class-Based Cuisines in the Antebellum United States
A Republican Cuisine

2 • “Wolf in Chef’s Clothing”: Manly Cooking and Negotiations of Ideal Masculinity
Why the Way to the Heart Is Through the Stomach
“Men, Meet the Kitchen”: Inventing Manly Cooking
Flesh, Blood, and Hemingway: Campfire Cooking and Rugged Masculinities
Hard-Boiled Cooking, Femmes Fatales, and American Noir
Silver Spoons in Their Hands: The Rise of the Gourmet
Playboys in the Kitchen: Manly Cooking in the 1950s and 1960s
“Will Cook for Sex”: Recipes for Manly Cooking