Tasting French Terroir : The History of an Idea 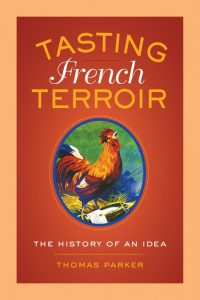 This book explores the origins and significance of the French concept of terroir, demonstrating that the way the French eat their food and drink their wine today derives from a cultural mythology that developed between the Renaissance and the Revolution. Through close readings and an examination of little-known texts from diverse disciplines, Thomas Parker traces terroir’s evolution, providing insight into how gastronomic mores were linked to aesthetics in language, horticulture, and painting and how the French used the power of place to define the natural world, explain comportment, and frame France as a nation.

Introduction: Terroir and the Culinary Roots of French Identity
1. Rabelais’s Table and the Poets of the Pleiade
2. The Plantification of People
3. Courtside Purity and the Academie Francaise’s Attack on the Earth
4. France’s Green Evolution: Terroir’s Expulsion from Versailles
5. Saint-Evremond and the Invention of Geographical Connoisseurship
6. Terroir and Nation Building: Boulainvilliers, Du Bos, and the Case of Class
7. The Normalization of Terroir: Paris and the Provinces
Conclusion: Terroir and Nation: From Geographic Identity to Psychogeography