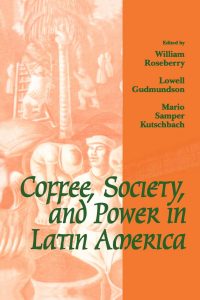 In January 1927 Gus Comstock, a barbershop porter in the small Minnesota town of Fergus Falls, drank eighty cups of coffee in seven hours and fifteen minutes. The New York Times reported that near the end, amid a cheering crowd, the man’s “gulps were labored, but a physician examining him found him in pretty good shape.” The event was part of a marathon coffee-drinking spree set off two years earlier by news from the Commerce Department that coffee imports to the United States amounted to five hundred cups per year per person.

In Coffee, Society, and Power in Latin America, a distinguished international group of historians, anthropologists, and sociologists examine the production, processing, and marketing of this important commodity. Using coffee as a common denominator and focusing on landholding patterns, labor mobilization, class structure, political power, and political ideologies, the authors examine how Latin American countries of the late nineteenth and early twentieth centuries responded to the growing global demand for coffee.

This unique volume offers an integrated comparative study of class formation in the coffee zones of Latin America as they were incorporated into the world economy. It offers a new theoretical and methodological approach to comparative historical analysis and will serve as a critique and counter to those who stress the homogenizing tendencies of export agriculture. The book will be of interest not only to experts on coffee economies but also to students and scholars of Latin America, labor history, the economics ofdevelopment, and political economy.