When Champagne Became French : Wine and the Making of a National Identity 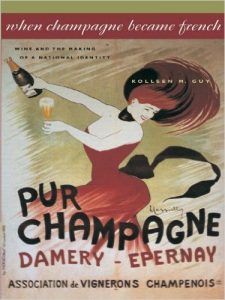 Winner of the Outstanding Manuscript Award from Phi Alpha Theta, this work explains how nationhood emerges by viewing countries as cultural artifacts, a product of “invented traditions.” In the case of France, scholars sharply disagree, not only over the nature of French national identity but also over the extent to which diverse and sometimes hostile provincial communities became integrated into the nation. In When Champagne Became French: Wine and the Making of a National Identity, Kolleen M. Guy offers a new perspective on this debate by looking at one of the central elements in French national culture — luxury wine — and the rural communities that profited from its production.

Focusing on the development of the champagne industry between 1820 and 1920, Guy explores the role of private interests in the creation of national culture and in the nation-building process. Drawing on concepts from social and cultural history, she shows how champagne helped fuel the revolution in consumption as social groups searched for new ways to develop cohesion and to establish status. By the end of the nineteenth century, Guy concludes, the champagne-producing provinces in the department of Marne had developed a rhetoric of French identity that promoted its own marketing success as national. This ability to mask local interests as national concerns convinced government officials of the need, at both national and international levels, to protect champagne as a French patrimony.