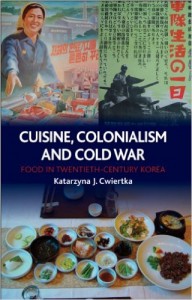 When you consider the size of Korea’s population and the breadth of its territory, it’s easy to see that this small region has played a disproportionately large role in twentieth-century history. The peninsula has experienced colonial submission at the hands of Japan, occupation by the United States and the Soviet Union, war, and a national division that continues today.

Cuisine, Colonialism and Cold War traces these developments as they played out in an unusual sphere: Korea’s national cuisine, which is savored for its diversity of ingredients and flavor. Katarzyna J. Cwiertka shows that many foods and dietary practices identified as Korean have been created or influenced by its colonial encounters, and she uncovers how the military and the Cold War had an impact on diet in both the North and South. Surveying the manufacture and consumption of rice and soy sauce, the rise of restaurants, wartime food, and the 1990s famine that still affects North Korea, Cwiertka illuminates the persistent legacy of Japanese rule and the consequences of armed conflicts and the Cold War. Bringing us closer to the Korean people and their daily lives, this book shines new light on critical issues in the social history of this peninsula.

“ This volume greatly adds to the available English-language scholarship on Korean food and also helps demonstrate the interconnectedness of history, culture, and food . . . a comprehensive study of twentieth-century Korean cuisine and how events such as the colonization by Japan, the Korean War, and division have played major roles in shaping the food we find today in Korea . . . an excellent volume.” Journal of Asian Studies

Katarzyna J. Cwiertka is professor and chair of modern Japan studies at Leiden University, the Netherlands, and the author of Modern Japanese Cuisine: Food, Power and National Identity, also published by Reaktion Books.