Forces of Habit : Drugs and the Making of the Modern World 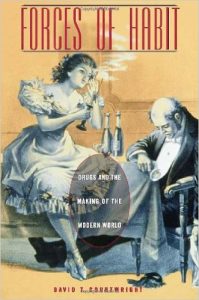 What drives the drug trade, and how has it come to be what it is today? A global history of the acquisition of progressively more potent means of altering ordinary waking consciousness, this book is the first to provide the big picture of the discovery, interchange, and exploitation of the planet’s psychoactive resources, from tea and kola to opiates and amphetamines.

From The New England Journal of Medicine :
Set on a world stage, this book is about the “psychoactive revolution” of the past 500 years. Courtwright, well known for his work concerning the history of drug addiction and, more generally, social history, observes that in wealthy societies in the 20th century a cornucopia of drugs, illicit and licit, became available and popular. How did this situation arise, he asks, and how have societies and governments coped with it, and especially, why have some drugs posed more of a problem than others? The main story relates to the expansion of European oceangoing commerce in early modern times and the resulting discoveries of new commercial opportunities. In the drug trade, the three big items eventually became alcohol, tobacco, and caffeine, to the exclusion of other possibilities derived from the plant world. These three drugs remain abundant and profitable commodities, eliciting various responses in different societies.
Thus, this book is not about medicine itself or about the changing practices of physicians over the centuries. Although the author mentions those practices from time to time, he is concerned with the broader story of the sweeping changes in the markets, and thereby in the uses, of a range of substances. And he explains how governments have responded differently in different ages to the growing commodification and popularity of psychoactive substances. Alcohol and caffeine were, of course, Old World products whose spread became enormously wider as a result of European expansion and European technology. Tobacco was a New World plant that conquered the Old World after Europeans discovered its psychoactive (and addictive) properties. At about the same time, advances in distilling techniques and the spread of information about them through the printed word created opportunities for making and selling alcohol. After their conquest of South America, some Europeans began cultivating coffee on that continent, while elsewhere other Europeans were expanding the tea trade. Alcohol, tobacco, and caffeine soon became important trade commodities, the taxation of which was a mainstay of government finances.

Courtwright does not confine his story to the big three in the drug world. He also writes about cannabis, opium, coca and cocaine, and synthetic products. None of these substances or their derivatives became commodified in quite the same way as did the big three, although there were important regional exceptions, such as the infamous opium dens of the Chinese. Part of the story of the lesser-used drugs is the relative absence of their commercialization. For example, until well into the 20th century, smoking marijuana was a practice of particular — and relatively small — populations in certain regions. Nor is Courtwright’s analysis entirely commercial. To the Christian Europeans, the Amerindians’ use of plant hallucinogens such as peyote was reprehensible.

One essential difference with respect to alcohol, tobacco, and caffeine was the skill of entrepreneurs and their resulting profits and power in promoting these products. Courtwright’s approach is to paint a large picture, while occasionally delving in some depth into particulars. He writes about James Duke and the growth of the cigarette trade after the late 19th century. The industry that Duke’s ingenuity and acumen fostered became very powerful, and it remains so today, able to fight off efforts to restrict it severely or even to eradicate it, however steep is the mountain of evidence about the ill effects of tobacco use.

Herein lies the story of a sea change in social approaches to drug use and the drug trades. With the advance of industrialized societies, concern mounted about the effects of psychoactive substances. Altered states of consciousness do not mix well with the needs of a technologically complex civilization. Europeans sometimes tolerated altered states of consciousness among peasants and workers as a means of easing the pain of their often miserable lives, especially in early modern times. Views changed with advancing industrialization in the 19th century, however. Even so, efforts to control the use of tobacco and alcohol detract from their potential as objects of taxation (and contradict the realities of their use). The enormous power of the tobacco and alcohol industries has overcome efforts to ban or restrict their products. When the United States, for instance, prohibited the liquor trades in 1920, wealthy Americans eventually engineered the law’s repeal by arguing that it would promote an economic revival (repeal occurred in 1933, the nadir of the Great Depression) and pointing out the benefits of having alcohol taxes.

In the case of other drugs that were declared illicit during the industrial age in some places, there are ongoing efforts to eradicate their use. Courtwright is known for his use of historical knowledge to argue against the legalization of “drugs,” and he does so again in a concluding chapter dealing with dangerous psychoactive substances in the 21st century.

Courtwright writes with felicity, gracefully constructing his narrative in a clearly organized fashion, eschewing jargon and technical language. This is an engaging book that deserves a wide audience among general readers.