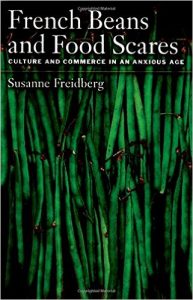 French Beans and Food Scares explores the cultural economies of two “non-traditional” commodity trades between Africa and Europe–one anglophone, the other francophone–in order to show not only why they differ but also how both have felt the fall-out of the wealthy world’s food scares. In a voyage that begins in the mid-19th century and ends in the early 21st, passing by way of Paris, London, Burkina Faso and Zambia, French Beans and Food Scares illuminates the daily work of exporters, importers and other invisible intermediaries in the global fresh food economy. These intermediaries’ accounts provide a unique perspective on the practical and ethical challenges of globalized food trading in an anxious age. They also show how postcolonial ties shape not only different societies’ geographies of food supply, but also their very ideas about what makes food good.

Susanne Freidberg has written about food regulation for the Washington Post and numerous journals. She grew up in the Pacific Northwest, attended Yale and Berkeley, and has received fellowships from the Fulbright Foundation, the National Science Foundation, the Radcliffe Institute for Advanced Study, and the American Council of Learned Societies. She teaches in the Department of Geography at Dartmouth College.