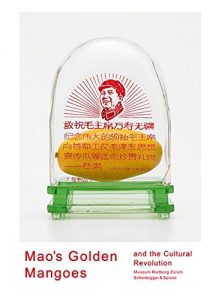 In August 1968, the Pakistani foreign minister visited Beijing and presented Chairman Mao Zedong with a crate of mangoes as a diplomatic gesture. The next day, Mao sent the mangoes to the “Worker-Peasant Mao Zedong though Propaganda Teams,” who had been stationed at Quinghua University to put down warring factions of Red Guards ten days previously. The message of this gift was to dismiss the Student Red Guards, who had been leaders of the proletarian movement in China, and in their stead to install workers as the permanent guardians of China’s education system. During the following weeks, the mangoes were distributed to several factories, where they were treated as though they were religious relics. The golden mango was thus a powerful emblem of the power and respect accorded to the proletariat under Mao’s rule.
Mao’s Gold Mangoes and the Cultural Revolution is the catalog for an exhibition of the same title at the Museum Rietberg in Zürich, which explores the golden mangoes’ reverberations throughout Chinese culture for years to come. Included texts focus on the historical narrative of the golden mangoes’ rise to fame; first-person accounts of both students and factory workers; an examination the National Day Parade in 1968, which used the symbol of the mangoes prominently; a critical essay on the 1976 film The Song of the Mango; and an in-depth comparative study of working conditions in China from the late 1960s and today.
Contents:
1. Qinghua University and Chinese Politics during the Cultural Revolution
Xiaowei Zheng
2. 1968: My Story of the Mango
Wang Xiaoping
3. Designing Spectacles: The 1968 Beijing National Day Parade
Daniel Leese
4. Food as Metaphor
Alfreda Murck
5. Political Awakening through the Magical Fruit: The Film Song of the Mango
Adam Yuet Chau
6. The Reverse Apotheosis of the Peasant-Worker
Alonzo Emery
Catalog of the Alfreda Murck Collection at the Museum Rietberg Zürich
I. Mangoes as a Gift to the Workers
II. October 1968: Parades, National and Regional
III. The People’s Liberation Army
IV. Objects Issued by Work Units
V. Marketing Mangoes: Consumer Goods to Foster Loyalty