Paradox of Plenty : Social History of Eating in Modern America 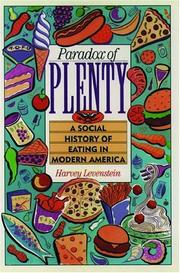 America has always been blessed with an abundance of food, but when it comes to the national diet, it is a land of stark contrast and paradox. In the early months of the Depression, for instance, there were 82 breadlines in New York City alone, and food riots broke out in such places as Henryetta, Oklahoma, and England, Arkansas. Yet at the same time, among those who were better-off, absurd weight-loss diets were the rage – the Pineapple-and-Lamb-Chop Diet, the “Mayo Diet” of raw tomatoes and hard-boiled eggs, and even a Coffee-and-Donuts Diet. Why do Americans eat what they eat? And why, in a land of plenty, do so many eat so poorly?

In Paradox of Plenty, Harvey Levenstein offers a sweeping social history of food and eating in America, exploring the economic, political, and cultural factors that have shaped the American diet from 1930 to the present. Levenstein begins with the Great Depression, describing the breadlines and the slim-down diets, the era’s great communal eating fests – the picnics, barbecues, fish fries, and burgoo feasts – and the wave of “vitamania” which swept the nation before World War II, breeding fears that the national diet was deficient in the so-called “morale vitamin.” He discusses wartime food rationing and the attempts of Margaret Mead and other social scientists to change American eating habits, and he examines the postwar “Golden Age of American Food Processing, ” when Duncan Hines and other industry leaders convinced Americans that they were “the best-fed people on Earth.” He depicts the disillusionment of the 1960s, when Americans rediscovered hunger and attacked food processors for denutrifying the food supply, and he shows how President Kennedy helpedrevive the mystique of French food (and how Julia Child helped demystify it). Finally, he discusses contemporary eating habits, the national obsession with dieting, cholesterolphobia, “natural” foods, the demographics of fast-food chains, and the expanding role of food processors.