Revolution at the Table: The Transformation of the American Diet 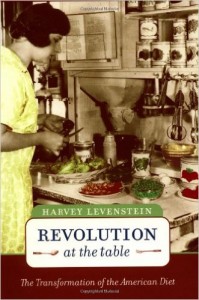 In this study Harvey Levenstein tells of how from 1880 to 1930, as America’s industries and cities swelled, various reformers tried to use the new nutritional science to make Americans eat more economically and healthily, sometimes with bizarre results. He shows how the disappearance of servants from middle-class kitchens, the rise of large corporations producing labor-saving foods and devices, and competition from new leisure activities led to declining expectations from middle-class housewives – both in terms of what they should feed their families and of how much they and their families should weigh. Meanwhile, while the middle class took to dieting, millions of the poor people continued to live on inadequate, unhealthy diets.

Harvey Levenstein is Professor Emeritus of History at McMaster University in Hamilton, Ontario. Among his books are Paradox of Plenty: A Social History of Eating in Modern America, Revised Edition (California, 2003), Seductive Journey: American Tourists in France from the Jefferson to the Jazz Age (1998), and Communism, Anticommunism and the CIO (1981).