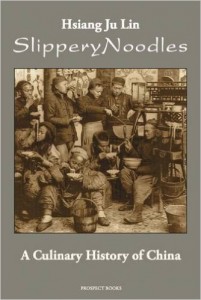 China is a big country and its cookery is one of the world’s greatest. In the last century all nations everywhere have been introduced to its tastes, flavours and cooking methods. But an understanding of Chinese food history is hard to come by: the country is large and the history is long. Hsiang Ju Lin has interrogated the written record, some of it dating back to the 5th century BC, and most recently from books current in the People’s Republic today; she has translated it and set it into culinary context and thereby allows the modern reader to enter into some of the breadth and depth of literature available.In a sequence of chronological chapters Hsiang Ju Lin plunges into specific topics as diverse as the influence of the Silk Road, the administration of the Imperial palace, the role of tea and sugar, many of the grand banquets of which we have record, the differences witnessed in the southern provinces, vegetarianism, bean curd and soy sauce, birds’ eggs and birds’ nests, the role of salt, the impact of the Western missions, noodles, and the relationship of food and medicine.The reader is able to taste the richness of the heritage, to read for him or herself the words as diverse as the Essential Skills for Common Folk by Jia Sixie (6th cent. AD), Food and Drink by Shen Zinan (7th cent. ), Tao Gu; Zhu Yizun, and Yuan Mei (17th and 18th), the diary of a salt merchant on the east coast and Madame Wu’s Home Cooking from the late Song dynasty.