Tea in China: A Religious and Cultural History 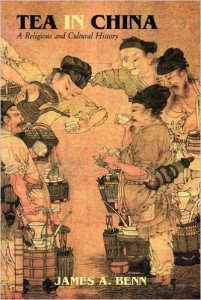 “This is a marvelous book, a long-view description of China’s basic geography, the advantages and constraints imposed by climate and terrain, human conservation and despoliation of the natural environment, and the effect of all of these on food customs.“—Paul Freedman, Yale University

Tea in China explores the contours of religious and cultural transformation in traditional China from the point of view of an everyday commodity and popularbeverage. Th e work traces the development of tea drinking from its mythical origins to the nineteenth century and examines the changes in aesthetics, ritual, science, health, and knowledge that tea brought with it. Th e shift in drinking habits that occurred in late medieval China cannot be understood without an appreciation of the fact that Buddhist monks were responsible for not only changing peopleAEs attitudes toward the intoxicating substance, but also the proliferation of tea drinking. Monks had enjoyed a long association with tea in South China, but it was not until Lu YuAEs compilation of the Chajing ( The Classic of Tea ) and the spread of tea drinking by itinerant Chan monastics that tea culture became popular throughout the empire and beyond. Tea was important for maintaining long periods of meditation; it also provided inspiration for poets and profoundly affected the ways in which ideas were exchanged.

Prior to the eighth century, the aristocratic drinking party had excluded monks from participating in elite culture. Over cups of tea, however, monks and literati could meet on equal footing and share in the same aesthetic values.Monks and scholars thus found common ground in the popular stimulant – one with few side eff ects that was easily obtainable and provided inspiration and energy for composing poetry and meditating. In addition, rituals associated with tea drinking were developed in Chan monasteries, aiding in the transformation of ChinaAEs sacred landscape at the popular and elite level. Pilgrimages to monasteries that grew their own tea were essential in the spread of tea culture, and some monasteries owned vast tea plantations. By the end of the ninth century, tea was a vital component in the Chinese economy and in everyday life. Tea in China transcends the boundaries of religious studies and cultural history as it draws on a broad range of materials – poetry, histories, liturgical texts, monastic regulations – many translated or analyzed for the fi rst time. Th e book will be of interest to scholars of East Asia and all those concerned with the religious dimensions of commodity culture in the premodern world.