The Hunting Apes: Meat Eating and the Origins of Human Behavior 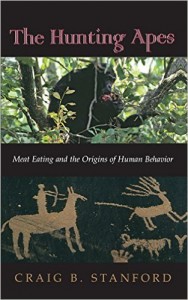 What makes humans unique? What makes us the most successful animal species inhabiting the Earth today? Most scientists agree that the key to our success is the unusually large size of our brains. Our large brains gave us our exceptional thinking capacity and led to humans’ other distinctive characteristics, including advanced communication, tool use, and walking on two legs. Or was it the other way around? Did the challenges faced by early humans push the species toward communication, tool use, and walking and, in doing so, drive the evolutionary engine toward a large brain? In this provocative new book, Craig Stanford presents an intriguing alternative to this puzzling question–an alternative grounded in recent, groundbreaking scientific observation. According to Stanford, what made humans unique was meat. Or, rather, the desire for meat, the eating of meat, the hunting of meat, and the sharing of meat.

Based on new insights into the behavior of chimps and other great apes, our now extinct human ancestors, and existing hunting and gathering societies, Stanford shows the remarkable role that meat has played in these societies. Perhaps because it provides a highly concentrated source of protein–essential for the development and health of the brain–meat is craved by many primates, including humans. This craving has given meat genuine power–the power to cause males to form hunting parties and organize entire cultures around hunting. And it has given men the power to manipulate and control women in these cultures. Stanford argues that the skills developed and required for successful hunting and especially the sharing of meat spurred the explosion of human brain size over the past 200,000 years. He then turns his attention to the ways meat is shared within primate and human societies to argue that this all-important activity has had profound effects on basic social structures that are still felt today.

Sure to spark a lively debate, Stanford’s argument takes the form of an extended essay on human origins. The book’s small format, helpful illustrations, and moderate tone will appeal to all readers interested in those fundamental questions about what makes us human.

Order the book
Food 2.0 LAB in association with Amazonr