The Story of Sushi : An Unlikely Saga of Raw Fish and Rice 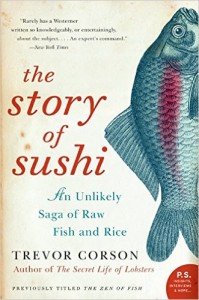 How Sushi went global ? Americans from as recently as 20 years ago would be astounded to learn that the present generation would regularly sit down to a meal consisting principally of raw fish. Today, it’s hard to find an American city that does not host at least one thriving sushi bar, and even some supermarkets feature a take-home sushi section. Following a student through the program of the decade-old California Sushi Academy, Corson uncovers the history of sushi, from its humble beginnings in Japan to its present worldwide ubiquity. Starting from Los Angeles’ Little Tokyo, sushi initially attracted a celebrity following intrigued by sushi’s novelty and minimalism. Stateside sushi chefs invented new varieties keyed to American proclivities and ingredients and, in a wanton affront to tradition, began to violate the inflexible male-only order of skilled sushi chefs. Americans may still drench their rice with too much soy sauce, but their hunger for more and better-quality sushi keeps on growing.

Trevor Corson takes us behind the scenes at America’s first sushi-chef training academy, as eager novices strive to master the elusive art of cooking without cooking. He delves into the biology and natural history of the edible creatures of the sea, and tells the fascinating story of an Indo-Chinese meal reinvented in nineteenth-century Tokyo as a cheap fast food. He reveals the pioneers who brought sushi to the United States and explores how this unlikely meal is exploding into the American heartland just as the long-term future of sushi may be unraveling. The Story of Sushi is at once a compelling tale of human determination and a delectable smorgasbord of surprising food science, intrepid reporting, and provocative cultural history.

Trevor Corson has studied philosophy in China, resided in Buddhist temples in Japan, and worked on commercial fishing boats off the Maine coast. He has written for the Atlantic Monthly and the New York Times.