First Fruit: The Creation of the Flavr Savr Tomato and the Birth of Biotech Food 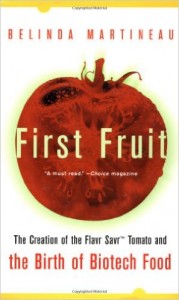 In 1994 a little biotech firm called Calgene introduced the Flavr Savr tomato, the first genetically-engineered food brought to market. Belinda Martineau served on the scientific team that developed the Flavr Savr, and when Calgene voluntarily submitted its product for FDA and USDA approval, Martineau provided most of the scientific evidence that led to its certification as safe for human consumption. She concurred with Calgene’s belief that the approval process would inform the public of the pros and cons of genetically-modified foods. Yet ultimately the process of engineering the Flavr Savr and bringing it to market made her question the validity of the product. The Flavr Savr was generally accepted by the public, despite some fierce opposition by environmentalists and consumer advocates, yet it did not prove to be commercially viable.

Though its introduction did engender discussion of the ethical, environmental and scientific issues surrounding agricultural biotechnology, the debate was squashed when ag-tech giant Monsanto bought Calgene and the process of egnieering food “went underground”. While genetically modified foods must be labelled in Europe, and the controversy over their safety is headline news in the UK, American consumers are eating a significant amount of them without even being aware of it.

This is an inside look at the making of the Flavr Savr from its conception, through its introduction to market, to its disappearance. Martineau reveals how the science of genetic engineering is really done, how corporate decisions are really made in biotech start-ups, and how the regulatory system does and does not work. Most importantly, the work goes behind the emotional issues surrounding genetically-modified foods and shows that the benefits and risks of this brave new technology are much more complicated than people realise.