Appetite for Change – How the Counterculture Took On the Food Industry 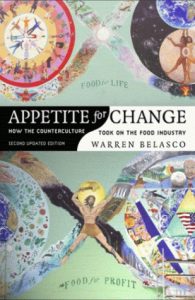 In this engaging inquiry, originally published in 1989 and now fully updated for the twenty-first century, Warren J. Belasco considers the rise of the “countercuisine” in the 1960s, the subsequent success of mainstream businesses in turning granola, herbal tea, and other “revolutionary” foodstuffs into profitable products; the popularity of vegetarian and vegan diets; and the increasing availability of organic foods.

Part One: Rebellion: The Making of a Counterculture
1. An Edible Dynamic
2. Radical Consumerism
3. Radical Therapy: The Oppositional Identity
4. Organic Force: An Alternative Infrastructure

Part Two: Processing Ideology: The Moral Panic
5. The Orthodox Defense: The War of the Metaphors
6. The Mess in Washington
7. The Press: Shifting the Center

“This book documents not only how cultural rebels created a new set of foodways, brown rice and all, but also how American capitalists commercialized these innovations to their own economic advantage. Along the way, the author discusses the significant relationship between the rise of a ‘countercuisine’ and feminism, environmentalism, organic agriculture, health consciousness, the popularity of ethnic cuisine, radical economic theory, granola bars, and Natural Lite Beer. Never has history been such a good read!”—The Digest: A Review for the Interdisciplinary Study of Food