The Invention of the Restaurant : Paris and Modern Gastronomic Culture 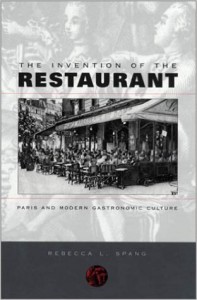 Public eateries are so ubiquitous it may not occur to most of us that the restaurant has a unique history, intimately tied to debates about aristocracy and democracy, public affairs, and private life in the era surrounding the French Revolution.

Spang, a lecturer in modern European history at University College – London, traces this history and challenges the traditional gastronomic narrative of dining out in the French capital.

Before the Revolution, a “restaurant” was a restorative bouillon; those who went to “restaurateurs’ rooms” were flaunting their delicacy. During the Revolution, fraternal banquets that ignored social distinctions were an ideal, which the hospitality of restaurateurs sometimes seemed to approximate. By Napoleon’s rise to power, “the regime separated pleasure from policing, fashion from ideology, and individual taste from communitarian truth.” In this era, gastronomy ruled; restaurants remained public places but were no longer political arenas. Spang’s work should appeal to readers seriously interested in the social and intellectual history of dining out.

introduction : to make a restaurant