Fat history : bodies and beauty in the Modern West 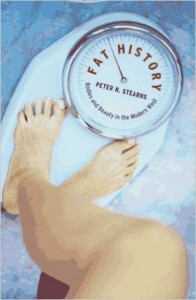 The modern struggle against fat cuts deeply and pervasively into American culture, as evidenced by the compulsion to stay thin, or at least to profess a desire to become thin. Dieting, weight consciousness and widespread hostility to obesity form one of the fundamental themes of modern life in countries around the world. Yet, for example, while the French are renowned for their delight in all things gustatory, they are significantly trimmer and less diet-obsessed than Americans. Indeed, “France had no equivalents of rural Americana’s pie-eating contests.”

Fat History explores the meaning of fat and anti-fat in modern Western society, focusing on the uniquely moral component of dieting in America. Tracing how standards of beauty and physical morality have been radically transformed over the past century in the United States and France, Peter N. Stearns illustrates how the contemporary obsession with fat arose in tandem with the dramatic growth in consumer culture, women’s increasing equality, and changes in women’s sexual and maternal roles. Contrary to popular belief, fashion and nutrition have played only a secondary role in spurring the American aversion to fat, while the French distaste for obesity can be traced to different origins altogether.

Filled with narrative anecdotes and rooted in Stearns’ trademark use of engaging original sources–from Ebony and Gourmet to The Journal of the American Medical Association and popularized accounts of French doctors–Fat History explores fat’s transformation from a symbol of health and well-being to a sign of moral, psychological, and physical disorder.

The medical path : physicians and faddists

Fat as a turn-of-the-century target : why ?

The evolution of weight control in France

Conclusion : the fat’s in the fire