First Catch Your Weka : The Story of New Zealand Cooking 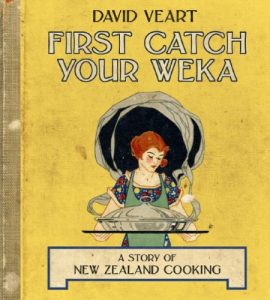 Analyzing more than 150 years of recipes and cookbooks, this study chronicles the culinary history of New Zealand, looking at curious dishes such as boiled calf’s head and stewed liver with macaroni, to the more traditional favorites such as homemade jams and chutneys. It explores what makes New Zealand cooking distinctive, and examines how the culture has changed, from the prevalence of whitebait and mussels in the 1920s, to the arrival of Asian influences in the 1950s, and finally to the modern emphasis on fresh ingredients and fusion cooking.

David Veart was born in Auckland, New Zealand, in 1950, descendant of an early military family. Trained as an anthropologist, he worked as a Department of Conservation historian and archaeologist for over twenty-five years. An expert on various Auckland landmarks of historical or archaeological significance, he is well-known for his public guided walks of these areas, about which he has also written film scripts and narrated interpretative films.

Veart is also an expert in New Zealand’s culinary history and a lover of cooking and recipes. He owns a large collection of cook books and has presented at conferences on aspects of culinary history.