The Pavlova Story : A Slice of New Zealand’s Culinary History 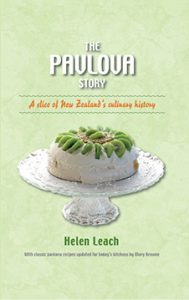 While Australians and New Zealanders have long debated which country invented the pavlova (a large meringue dessert cake said to emulate the lightness of the famous ballerina, Anna Pavlova), the real story of the ballerina’s visit to the Antipodes and the emergence of three different pavlovas was neglected.

The contributions of a gelatine manufacturer, a Dunedin spinster, and numerous other New Zealand housewives are all revealed in this fascinating contribution to food history. The book shows the evolution of the three pavlova types, that their recipes have never been set in stone, and that creative and innovative cooks have played the most important roles in transforming a fashionable afternoon tea cake into an iconic dessert.