Food for Africa : The life and work of a scientist in GM crops 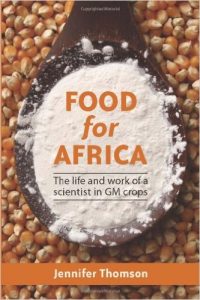 Tracing through anecdote and science the development of a hotly contended area of research, this account expounds the dawn of genetic engineering in the United States in 1974, through the early stages of its uptake in South Africa, to the current situation, in which approximately 80 percent of maize in South Africa is genetically modified for drought resistance. The guide through this history is Jennifer Thomson, whose own story of how she came to choose genetic modification (GM) as a career and her path-breaking involvement in the development of GM research. She describes the spread of this technology into other parts of Africa and her venture into unknown territory to develop crops resistant to drought, insects, and viruses, a journey in which she came up against the multinational Monsanto. The book describes a remarkable personal and scientific evolution and looks to a future in which staple crops may be grown in difficult conditions by smallholder farmers and help Africans achieve food security.

Jennifer Thomson is emeritus professor in department of molecular and cell biology at the University of Cape Town and is one of the world’s leading scientists in the field of genetic modification. She is the author of Genes for Africa: Genetically Modified Crops in the Developing World and Seeds for the Future: The Impact of Genetically Modified Crops on the Environment.