Eating Right in America : The Cultural Politics of Food and Health 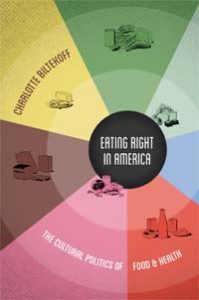 Eating Right in America is a powerful critique of dietary reform in the United States from the late nineteenth-century emergence of nutritional science through the contemporary alternative food movement and campaign against obesity. Charlotte Biltekoff analyzes the discourses of dietary reform, including the writings of reformers, as well as the materials they created to bring their messages to the public. She shows that while the primary aim may be to improve health, the process of teaching people to “eat right” in the U.S. inevitably involves shaping certain kinds of subjects and citizens, and shoring up the identity and social boundaries of the ever-threatened American middle class. Without discounting the pleasures of food or the value of wellness, Biltekoff advocates a critical reappraisal of our obsession with diet as a proxy for health. Based on her understanding of the history of dietary reform, she argues that talk about “eating right” in America too often obscures structural and environmental stresses and constraints, while naturalizing the dubious redefinition of health as an individual responsibility and imperative.

Charlotte Biltekoff is Assistant Professor of American Studies & Food Science and Technology at the University of California, Davis. Previously, she was a chef at Greens, a well-known vegetarian restaurant in San Francisco.

1. The Cultural Politics of Dietary Health

2. Scientific Moralization and the Beginning of Modern Dietary Reform

3. Anxiety and Aspiration on the Nutrition Front

5. Thinness as Health, Self-Control, and Citizenship

6. Connecting the Dots: Dietary Reform Past, Present, and Future