Holy Feast and Holy Fast : The Religious Significance of Food to Medieval Women 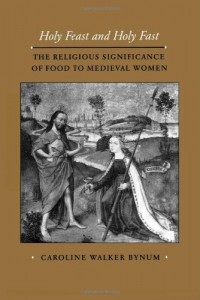 In the period between 1200 and 1500 in western Europe, a number of religious women gained widespread veneration and even canonization as saints for their extraordinary devotion to the Christian eucharist, supernatural multiplications of food and drink, and miracles of bodily manipulation, including stigmata and inedia (living without eating). The occurrence of such phenomena sheds much light on the nature of medieval society and medieval religion. It also forms a chapter in the history of women.

Previous scholars have occasionally noted the various phenomena in isolation from each other and have sometimes applied modern medical or psychological theories to them. Using materials based on saints’ lives and the religious and mystical writings of medieval women and men, Caroline Walker Bynum uncovers the pattern lying behind these aspects of women’s religiosity and behind the fascination men and women felt for such miracles and devotional practices. She argues that food lies at the heart of much of women’s piety. Women renounced ordinary food through fasting in order to prepare for receiving extraordinary food in the eucharist. They also offered themselves as food in miracles of feeding and bodily manipulation.

Providing both functionalist and phenomenological explanations, Bynum explores the ways in which food practices enabled women to exert control within the family and to define their religious vocations. She also describes what women meant by seeing their own bodies and God’s body as food and what men meant when they too associated women with food and flesh. The author’s interpretation of women’s piety offers a new view of the nature of medieval asceticism and, drawing upon both anthropology and feminist theory, she illuminates the distinctive features of women’s use of symbols. Rejecting presentist interpretations of women as exploited or masochistic, she shows the power and creativity of women’s writing and women’s lives.

Fast and feast : the historical background

Food as a female concern : the complexity of the evidence

Food in the lives of women saints

Food in the writings of women mystics

Food as control of self

Food as control of circumstance

The meaning of food : food as physicality

Woman as body and as food