Plants and Empire. Colonial Bioprospecting in the Atlantic World 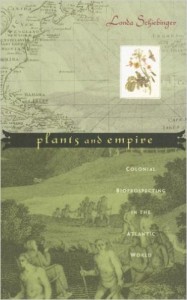 Plants seldom figure in the grand narratives of war, peace, or even everyday life yet they are often at the center of high intrigue. In the eighteenth century, epic scientific voyages were sponsored by European imperial powers to explore the natural riches of the New World, and uncover the botanical secrets of its people. Bioprospectors brought back medicines, luxuries, and staples for their king and country. Risking their lives to discover exotic plants, these daredevil explorers joined with their sponsors to create a global culture of botany.

But some secrets were unearthed only to be lost again. In this moving account of the abuses of indigenous Caribbean people and African slaves, Schiebinger describes how slave women brewed the “peacock flower” into an abortifacient, to ensure that they would bear no children into oppression. Yet, impeded by trade winds of prevailing opinion, knowledge of West Indian abortifacients never flowed into Europe. A rich history of discovery and loss, Plants and Empire explores the movement, triumph, and extinction of knowledge in the course of encounters between Europeans and the Caribbean populations.