Hungry Planet: What the World Eats 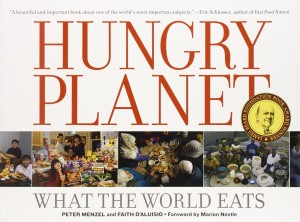 HUNGRY PLANET profiles 30 families from around the world–including Bosnia, Chad, Egypt, Greenland, Japan, the United States, and France–and offers detailed descriptions of weekly food purchases; photographs of the families at home, at market, and in their communities; and a portrait of each family surrounded by a week’s worth of groceries. Featuring photo-essays on international street food, meat markets, fast food, and cookery, this captivating chronicle offers a riveting look at what the world really eats.

The paperback edition of the 2006 James Beard Book of the Year featuring a photojournalistic survey of 30 families from 24 countries and the food they eat during the course of one week. Winner of the 2006 James Beard Award for writings on food, finalist for the 2006 IACP Cookbook Award for food reference/technical, and winner of the 2005 Harry Chapin Media Award. Includes more than 300 photographs plus essays on the politics of food by Marion Nestle, Michael Pollan, Charles C. Mann, Alfred W. Crosby, Francine R. Kaufman, Corby Kummer, and Carl Safina. The hardcover edition has sold 40,000 copies. 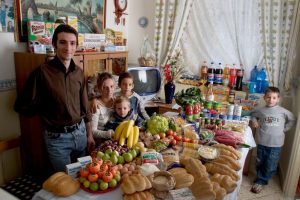 The Manzo family of Sicily

Peter Menzel is an award-winning photojournalist who has been published in Time, National Geographic, and Smithsonian, among others.
Faith D’Aluisio is a former TV news producer and the writer for their Material World books, which include Material World: A Global Family Portrait, Women in the Material World, the James Beard Award-winning Man Eating Bugs and Hungry Planet, and What the World Eats.