Where Our Food Comes from : Retracing Nikolay Vavilov’s Quest to End Famine 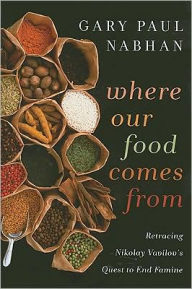 The future of our food depends on tiny seeds in orchards and fields the world over. In 1943, one of the first to recognize this fact, the great botanist Nikolay Vavilov, lay dying of starvation in a Soviet prison. But in the years before Stalin jailed him as a scapegoat for the country’s famines, Vavilov had traveled over five continents, collecting hundreds of thousands of seeds in an effort to outline the ancient centers of agricultural diversity and guard against widespread hunger. Now, another remarkable scientist—and vivid storyteller—has retraced his footsteps.
In Where Our Food Comes From, Gary Paul Nabhan weaves together Vavilov’s extraordinary story with his own expeditions to Earth’s richest agricultural landscapes and the cultures that tend them. Retracing Vavilov’s path from Mexico and the Colombian Amazon to the glaciers of the Pamirs in Tajikistan, he draws a vibrant portrait of changes that have occurred since Vavilov’s time and why they matter.

In his travels, Nabhan shows how climate change, free trade policies, genetic engineering, and loss of traditional knowledge are threatening our food supply. Through discussions with local farmers, visits to local outdoor markets, and comparison of his own observations in eleven countries to those recorded in Vavilov’s journals and photos, Nabhan reveals just how much diversity has
already been lost. But he also shows what resilient farmers and scientists in many regions are doing to save the remaining living riches of our world.

It is a cruel irony that Vavilov, a man who spent his life working to foster nutrition, ultimately died from lack of it. In telling his story, Where Our Food Comes From brings to life the intricate relationships among culture, politics, the land, and the future of the world’s food.

Gary Paul Nabhan is a world-renowned ethnobiologist, conservationist, and essayist. The author of Why Some Like It Hot, Coming Home to Eat, and many other books and articles, he has been honored with a M MacArthur ‘Genius’ Fellowship and The John Burroughs Medal for nature writing. Founder and facilitator of the Renewing America’s Food Traditions collaborative, he is currently a Research Social Scientist at the Southwest Center at the University of Arizona.

Chapter 1. The Art Museum and the Seed Bank
Chapter 2. The Hunger Artist and the Horn of Plenty
Chapter 3. Melting Glaciers and Waves of Grain: The Pamirs
Chapter 4. Drought and the Decline of Variety: The Po Valley
Chapter 5. From Breadbasket to Basket Case: The Levant
Chapter 6. Date Palm Oases and Desert Crops: The Maghreb
Chapter 7. Finding Food in Famine’s Wake: Ethiopia
Chapter 8. Apples and Boomtown Growth: Kazakhstan
Chapter 9. Rediscovering America and Surviving the Dust Bowl: The U.S. Southwest
Chapter10. Logged Forests and Lost Seeds: The Sierra Amazon
Chapter 11. Deep into the Tropical Forests of the Amazon
Chapter 12. The Last Expedition