Empty Pleasures : The Story of Artificial Sweeteners from Saccharin to Splenda 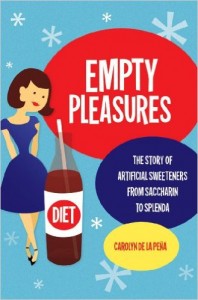 Sugar substitutes have been a part of American life since saccharin was introduced at the 1893 World’s Fair. In Empty Pleasures, the first history of artificial sweeteners in the United States, Carolyn de la Pena blends popular culture with business and women’s history, examining the invention, production, marketing, regulation, and consumption of sugar substitutes such as saccharin, Sucaryl, NutraSweet, and Splenda. She describes how saccharin, an accidental laboratory by-product, was transformed from a perceived adulterant into a healthy ingredient. As food producers and pharmaceutical companies worked together to create diet products, savvy women’s magazine writers and editors promoted artificially sweetened foods as ideal, modern weight-loss aids, and early diet-plan entrepreneurs built menus and fortunes around pleasurable dieting made possible by artificial sweeteners.

NutraSweet, Splenda, and their predecessors have enjoyed enormous success by promising that Americans, especially women, can “have their cake and eat it too,” but Empty Pleasures argues that these “sweet cheats” have fostered troubling and unsustainable eating habits and that the promises of artificial sweeteners are ultimately too good to be true.

Carolyn de la  is professor of American studies at the University of California, Davis. She is author of The Body Electric: How Strange Machines Built the Modern American.