Hideous Absinthe : A History of the Devil in a Bottle 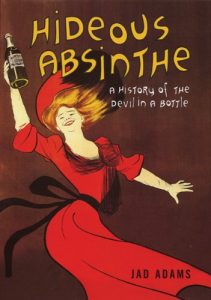 Absinthe, a strongly alcoholic drink with a reputation of mythic proportions, is again in fashion, 90 years after it was banned in France and elsewhere as a cause of madness. The drink, a potent concoction of wormwood, herbs, and between 55 percent and 75 percent alcohol, continues to fascinate, and Hideous Absinthe is one of several recent books on the subject. Jad Adams, a writer of biographies of literary and political figures, focuses on two aspects of absinthe’s history: its role in the bohemian literary and artistic movements of France and Britain and the efforts made to ban the drink.

By the late 19th century, absinthe was not only a popular aperitif but, Adams neatly suggests, a drink of “display and provocation.” Artists and writers celebrated its hallucinatory effects and referred to it affectionately as “the green fairy” or “holy water.” Doctors, politicians, and social critics, citing medical research that indicated that one component of wormwood, thujone, caused hallucinations and madness, denounced the drink as “a quick coach to the madhouse” and, in the United States, “the green curse of France.” Adams examines the development of these competing myths, which, he argues, were primarily the product of artistic, social, or political preoccupations. The book ends with an acerbic examination of the recent revival of absinthe and its myths, thanks to clever publicity, an increased public tolerance of drug use, and the Internet.

Despite its sensationalist title and colorful dust jacket, Hideous Absinthe is a careful and considered account of a drink whose reputation has always exceeded its consumption. Adams examines the careers and often prodigious alcohol intake of such artists and writers as Paul Verlaine, Vincent Van Gogh, Henri de Toulouse-Lautrec, and Oscar Wilde. He is, however, skeptical of claims that absinthe was the source of these artists’ creativity or of their sometimes self-destructive drinking habits. Only in exceptional cases, such as Paul Gauguin’s perceptions of color, does Adams discern any influence of absinthe. Rather, he stresses that artists and writers in Paris and London used absinthe as one of many symbols to express their defiance of traditional middle-class values. The banning of absinthe only added to its allure, and 20th-century writers such as Ernest Hemingway found the drink a useful device for fashioning an image of manly daring.

Adams is equally skeptical of the scientific and medical evidence cited by those who sought to ban the drink. He argues that such supposedly objective evidence was, and in some cases continues to be, shaped by social or cultural influences. His prime example is the work of Valentin Magnan, France’s foremost psychiatrist and a leading expert on alcoholism in the late 19th century. On the basis of laboratory experiments in which guinea pigs were injected with high doses of thujone, Magnan claimed that absinthe produced a distinct and dramatic form of madness called absinthism. Adams explores the dubious scientific basis of Magnan’s experiments and their popularization in anti-absinthe campaigns. He is equally critical of more recent scientific research on thujone.

Adams has read widely on his topic, from obscure poetry to the latest scholarship, and he can nicely juxtapose a scientific report on the supposedly devastating effects of absinthe with a minor poet’s witty riposte. He is careful to acknowledge his scholarly sources, making this a useful book for those who want to read further. Historians or specialists on addiction will question some assertions, such as the extent to which women consumed absinthe or the impact of the drink’s ban on later prohibition movements. France, after all, banned absinthe, but the French temperance movement was careful to distance itself from American Prohibition, which it judged excessive and puritanical. But even specialists will learn something from this balanced and informative account. Hideous Absinthe might also interest public officials contemplating a ban on reputedly harmful substances or those drinkers who, enticed by clever publicity, have tried absinthe and found its taste to be vile and its effects disappointing. As Adams observes, absinthe will always “fill the role required of it.”