The Essence of Japanese Cuisine : An Essay on Food and Culture 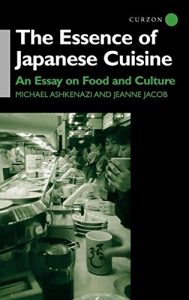 “It was a most exquisite repast, a veritable feast of the senses.” Such is the fond memory of Michael Ashkenazi and Jeanne Jacob of a late summer meal in Japan which in every taste, texture, and aesthetic detail signaled the turning of the season. Vividly describing this and countless other fine meals, The Essence of Japanese Cuisine seats the reader at a table rich in culinary tradition.

From menu arrangement to cooking techniques, course selection to entertainment styles, The Essence of Japanese Cuisine studies the Japanese meal and the historical, social, and economic principles that underpin Japanese food culture. Drawing from extensive fieldwork, surveys, and sources ranging from contemporary shop advertisements to classical writings and paintings, Ashkenazi and Jacob analyze how meals are structured, where food is prepared, where it is consumed, and what rituals and cultural rules define the art of the Japanese food event. Their personal experiences as diners serve as sensory tools for examining Japanese cuisine and its place in Japanese society, and they draw as well on Japanese and other culinary studies from such writers as Goody, Harris, Brillat-Savarin, Fisher, Ishige, and Mennell. The book concludes by assessing some of the lessons that can be learned from the Japanese dining experience, especially as Japanese cuisine takes its place among world foods.

Michael Ashkenazi has written scholarly articles on Japanese religion, business, and food. Jeanne Jacob is a scholar and author on Japanese art, crafts, and food.