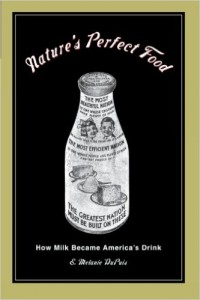 For over a century, America’s nutrition authorities have heralded milk as “nature’s perfect food” as “indispensable” and “the most complete food” These milk “boosters” have ranged from consumer activists, to government nutritionists, to the American Dairy Council and its ubiquitous milk moustache ads. The image of milk as wholesome and body-building has a long history, but is it accurate? Recently, within the newest social movements around food, milk has lost favor. Vegan anti-milk rhetoric portrays the dairy industry as cruel to animals and milk as bad for humans. Recently, books with titles like, “Milk: The Deadly Poison” and “Don’t Drink Your Milk” have portrayed milk as toxic and unhealthy. Controversies over genetically-engineered cows and questions about antibiotic residue have also prompted consumers to question whether the milk they drink each day is truly good for them.

In Nature’s Perfect Food Melanie Dupuis illuminates these questions by telling the story of how Americans came to drink milk. We learn how cow’s milk, which was associated with bacteria and disease became a staple of the American diet. Along the way we encounter 19th century evangelists who were convinced that cow’s milk was the perfect food with divine properties, brewers whose tainted cow feed poisoned the milk supply, and informal wetnursing networks that were destroyed with the onset of urbanization and industrialization. Informative and entertaining, Nature’s Perfect Food will be the standard work on the history of milk.

E. Melanie DuPuis is Associate Professor of Sociology at the University of California, Santa Cruz