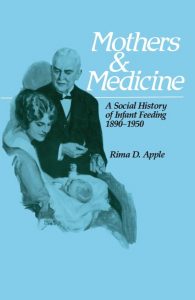 In the nineteenth century, infants were commonly breast-fed; by the middle of the twentieth century, women typically bottle-fed their babies on the advice of their doctors.  In this book, Rima D. Apple discloses and analyzes the complex interactions of science, medicine, economics, and culture that underlie this dramatic shift in infant-care practices and women’s lives.
As infant feeding became the keystone of the emerging specialty of pediatrics in the twentieth century, the manufacture of infant food became a lucrative industry.  More and more mothers reported difficulty in nursing their babies.  While physicians were establishing themselves and the scientific experts and the infant-food industry was hawking the scientific bases of their products, women embraced “scientific motherhood,” believing that science could shape child care practices.  The commercialization and medicalization of infant care established an environment that made bottle feeding not only less feared by many mothers, but indeed “natural” and “necessary.”  Focusing on the history of infant feeding, this book clarifies the major elements involved in the complex and sometimes contradictory interaction between women and the medical profession, revealing much about the changing roles of mothers and physicians in American society.

“The strength of Apple’s book is her ability to indicate how the mutual interests of mothers, doctors, and manufacturers led to the transformation of infant feeding. . . . Historians of science will be impressed with the way she probes the connections between the medical profession and the manufacturers and with her ability to demonstrate how medical theories were translated into medical practice.”—Janet Golden, Isis