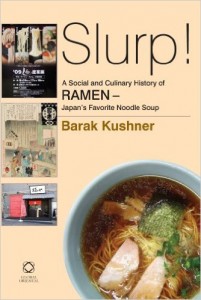 Ramen, Japan’s noodle soup, is a microcosm of Japan and its historical relations with China. The long evolution of ramen helps us enter the history of cuisine in Japan, charting how food and politics combined as a force within Sino-Japan relations. Cuisine in East Asia plays a significant political role, at times also philosophical, economic, and social. Ramen is a symbol of the relationship between the two major forces in East Asia what started as a Chinese food product ended up almost 1,000 years later as the emblem of modern Japanese cuisine. This book explains that history from myths about food in ancient East Asia to the transfer of medieval food technology to Japan, to today’s ramen popular culture. Based on research in Chinese and Japanese, as well as interviews with comedians, food service professionals, entertainment managers, store-owners, customers, and scholars of food history, Kushner explores the history of ramen and Japan’s noodle culture over the last 1,000 years.

Barak Kushner, PhD (2002), teaches Japanese history at the University of Cambridge. The Thought War, his first book, delves into the history of wartime Japanese propaganda. He is finishing a third book on Japanese war crimes in China. For more: (www.barakkushner.net).