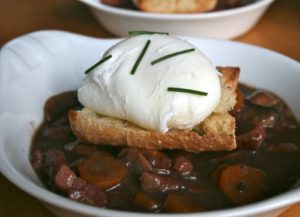 French gastronomy, so highly regarded worldwide, does put substantial emphasis on meat, especially for main courses. Coq au Vin, Pot au Feu, Beef Bourguignon and Steak Chateaubriand are famous dishes, and famously meaty. Whether at restaurants or in canteens, avoiding meat in France is, as Sandra Haurant in The Guardian put it, ‘a tricky business’.

Yet many traditional French dishes are in fact vegetarian: why don’t we see more of them on menus? One of the joys of French cuisine is its regional diversity. It would be great for both French people and foreign visitors to enjoy regional vegetarian dishes along with the lovely French accompaniments: bread, cheese, desserts, and of course, wine. It could even be a canny choice for chefs and restaurateurs to put a vegetarian dish on the menu, as they are often cheaper to prepare than meat dishes. 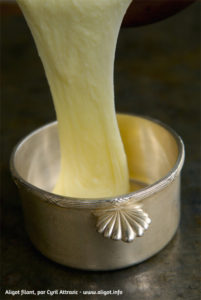 Being a vegetarian in France can feel like a pleasure and a pain. There is the pleasure of the fantastic diversity and quality of vegetarian ingredients: the fruit, vegetables, cheese, bread, pastries, and so on. But look at the menu of a typical French restaurant and the pain is the lack of vegetarian options, especially in the ‘formules’ or set menus that are so popular at lunchtime.

So why don’t we go on a little ‘Tour de France’ of vegetarian dishes? Many more could be added to this list. Dishes with eggs and cheese are included, those with fish are excluded. Some of those listed may appear on menus as side dishes but, crucially, it is also possible for them to be served as main courses in their own right or dressed with other ingredients.

Tour of French Vegetarian Dishes (with links to recipes in French)

And all of this is without even mentioning the omelettes, galettes, raclettes, ratatouilles, oeufs en cocotte, gratins, fougasses and quiches that are widely known, quintessentially French and very often prepared without meat. Eating well in France doesn’t always have to mean meat as a main course: bon appétit!

Rory Hill is a British geographer and a research scholar at the Food 2.0 LAB ; his works focuses on French terroir.