In 2015, Rob Rhinehart, 26, software engineer and founder of the startup company Soylent, have been nominated by Inc. Magazine in their 2015 “best and brightest young entrepreneurs” list.  Since 2013, his company markets Soylent, a beverage in the form of a powder to be mixed with water, and intended to be a “meal replacement” which would save time and money we spend on meals. When a student at Georgia Tech, Rhinehart began to consider food as an engineering problem, and he used to say: “You need amino acids and lipids, not milk itself ”; “You need carbohydrates, not bread”…

For Rhinehart, food is an inefficient way of getting what we need to survive. His product named “Soylent” evokes the 1973 science-fiction film “Soylent Green”, starring Charlton Heston. The movie is set in a dystopian future where agriculture has almost disappeared and most people live on mysterious wafers (synthetic tablets) called Soylent Green manufactured by a multinational company.  A world where eating is about energy intake  and “food is fuel” : an aseptic world without geography – lifeless.

On the contrary, the history of food – at least since the Neolithic – is the story of life through the domestication of animals, plants, and yeasts (leavens). Over time, our culinary systems have incorporated the mysterious forces at work in fermentation. It was thought that leaven, once mixed with a (food)substance of a different nature, have the power to convert this substance into its own nature. Fermentation was a mystery, and seen as such by the Church : a particular form of “transubstantiation” similar to the change from bread and wine to body and blood of Christ, by God’s power, in the Eucharist.  St. Hildegard of Bingen (1098-1190) the German Benedictine abbess and scholar describes conception by means of the analogy of milk curdling into cheese; in the making of the embryo, semen was acting just as rennet acts upon milk coagulation.

It’s no surprise that during the Middle Ages, most of the cheeses were “invented” under the control of the Church by monks secluded in their abbeys ; it’s the case of French cheeses like Pont-l’Evêque, saint Marcellin, Sassenage, Munster, Port Salut… the list goes on.  Italian historian Carlo Ginzburg, brilliantly showed in his book The Cheese and the worms, how in the 16th century, the Catholic Church and the Inquisition ferociously controlled and suppressed folk heretic beliefs and narratives associated with creation,”spontaneous generation” and cheesemaking. In the late 19th century, French biologist Louis Pasteur dusted off those old theological beliefs: lactic fermentation is caused by living micro-organisms. Our culinary cultures and foodstuffs are deeply characterized by all sorts of microbes, yeasts, and “good bacteria”: bread, cheese, wine, beer, dosa, kimchi, miso, idli, busa, kombucha …  are literally the milestones of our food geographies. 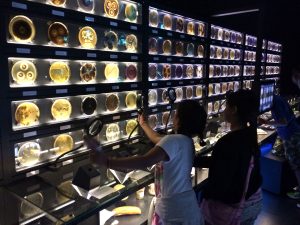 Today, genomics and bioinformatics are changing the Pasteurian cartography ; new mappings of the “microbial world” are emerging from surprising habitats and landscapes, such as oil fields, ice caps, and deep sea zones. In September 2014, the first microbial zoo ( “Micropia“) opened its doors in Amsterdam: Farewell lions, giraffes, and elephants !  Welcome bacteria, fungi, viruses, micro-algae, aspergillus !  We can now explore the life of microbes inside our human bodies to understand how they interact with us. Nearly 9 out of 10 cells in our body are microbial cells. They live in us, they form complex ecosystems, they are involved in protein and vitamin synthesis, and “friendly” microbes train our immune system[2]. Every day, three pounds of microbes contribute to our digestion and health.

Rob Knight is one of the pioneers in the exploration of the new microbial territories. In his lab in La Jolla (University of California, San Diego) he receives samples of microbes from all over the world: from Archaea found on marine sediments at the bottom of the Pacific, to microbes inhabiting an owl nest in Alaska. The genomes of those “microbial communities” across the globe are sequenced and analyzed as part of a larger scientific endeavor named the “Earth Microbiome Project”[3].  A”global Gene Atlas” is in progress. New landscapes and new microbial maps of the Earth are drawn ; they also serve another research project called the “Human Food Project”. The purpose is to understand the co-evolution between men and microbes from a food and nutrition perspective:”good bacteria”, “bad microbes” which ones are useful to our health and eating habits ? Mapping the microbial diversity of the American Gut is one of the first goal of the project.

The “Earth Microbiome Project” is also a global “bio-prospecting” venture, in many ways comparable to the 18th century scientific expeditions around the globe lead by European powers and naturalists in search for new medicinal and edible plants. Stakes were high, both scientific and commercial.  Competition amongst Europeans was fierce. In 1753, French naturalist Pierre Poivre stole nutmeg and clove from the Dutch and started their cultivation in his garden in the Mascarene Islands. New plants, spices and foodstuffs were discovered, new trade routes were opened, and new eating habits appeared. At the same period, food utopias emerged such as the “breadfruit”, briefly seen as a possible new staple (daily bread) and whole meal replacement which would have saved Europe and the world from hunger.

Today, the microbial exploration of the world is also a scientific and commercial enterprise. And this story began in Paris in the 1900’s when Ilya Mechnikov (1845-1916), a Russian zoologist at the Pasteur Institute studied bacteria from curdling milk (“probiotics”) which he thought may contribute to our health and longevity – notably Lactobacilicus bulgaricus, a bacteria found in Bulgarian yogurts. In 1908, Mechnikov was awarded the Nobel prize in medicine. Few years later, Isaac Carasso, inspired by Mechnikov’s work on immunology, gut bacteria, and health, founded a small company in Barcelona and later in France, importing “bacterial cultures” from Bulgaria to produce and market yogurts under his company named “Danone”.

The new genetic mappings of “microbial territories”, especially our gut microbiome open our culinary imagination and creation. For example: today Californian microbiologists and flavor experts are “inventing” new cheeses from fermented almond milk, while Korean farmers improve soil condition and crop health with Indigenous Microorganism (IMO) – microorganisms that survived and adapted to that local place for generations. The “Food 2.0” revolution is in the making. More than ever, “food is information”.

Richard C. Delerins is Associate research scholar in anthropology at the Sorbonne University – CNRS (ISCC) and Co-Director of the Food 2.0 LAB Paris.