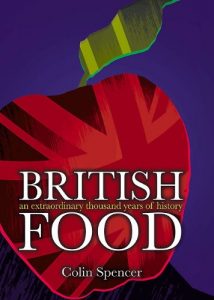 This important award-winning book is recognised as the authoritative work on the subject of British food. It is a breath-taking attempt to trace the changes to and influences on food in Britain from the Black Death, through the Enclosures, the Reformation, the Industrial Revolution, the rise of Capitalism to the present day. There has been a recent wave of interest in food culture and history and Colin Spencer’s masterful, readable account of our culinary history is a celebrated contribution to the genre. There has never been such an exciting, broad-scoped history of the food of these islands. It should remind us all of our rich past and the gastronomic importance of British cuisine.

Until the middle of the nineteenth century, English cuisine was known throughout Europe as extraordinarily stylish, tasteful, and contemporary, designed to satisfy sophisticated palates. So, as Colin Spencer asks, why did British food “decline so direly that it became a world-wide joke, and how is it now climbing back into eminence?” This delectable volume traces the rich variety of foods that are inescapably British—and the thousand years of history behind them.

Colin Spencer’s masterful and witty account of Britain’s culinary heritage explores what has influenced and changed eating in Britain—from the Black Death, the Enclosures, the Reformation, the Age of Exploration, the Industrial Revolution, and the rise of capitalism to present-day threats posed by globalization, including factory farming, corporate control of food supplies, and the pervasiveness of prepackaged and fast foods. He situates the beginning of the decline in British cuisine in the Victorian age, when various social, historical, and economic factors—an emphasis on appearances, a worship of French cuisine, the rise of Nonconformism, which saw any pleasure as a sin, the alienation from rural life found in burgeoning towns, the rise and affluence of the new bourgeoisie, and much else—created a fear that simple cooking was vulgar. The Victorians also harbored suspicions that raw foods were harmful, encouraged by the publication of a key cookbook of the period, Mrs. Beeton’s Book of Household Management.

However, twenty-first century British cooking is experiencing a glorious resurgence, fueled by television gurus and innovative restaurants with firm roots in the British tradition. This new interest in and respect for good food is showing the whole world, as Spencer puts it, “that the old horror stories about British food are no longer true.”

Colin Spencer is an author and playwright and was food editor for The Guardian for thirteen years. He is the author of Vegetarianism: A History and co-author ofThe Faber Book of Food.