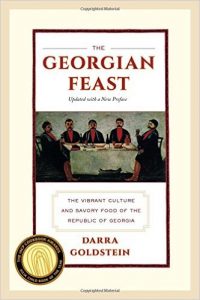 “Every Georgian dish is a poem”, Alexander Pushkin.
According to Georgian legend, God took a supper break while creating the world. He became so involved with his meal that he inadvertently tripped over the high peaks of the Caucasus, spilling his food onto the land below. The land blessed by Heaven’s table scraps was Georgia.

Nestled in the Caucasus mountain range between the Black and Caspian seas, the Republic of Georgia is as beautiful as it is bountiful. The unique geography of the land, which includes both alpine and subtropical zones, has created an enviable culinary tradition. In The Georgian Feast, Darra Goldstein explores the rich and robust culture of Georgia and offers a variety of tempting recipes.

The book opens with a fifty-page description of the culture and food of Georgia. Next are over one hundred recipes, often accompanied by notes on the history of the dish. Holiday menus, a glossary of Georgian culinary terms, and an annotated bibliography round out the volume.

Darra Goldstein is the Willcox B. and Harriet M. Adsit Professor of Russian at Williams College and Founding Editor of Gastronomica: The Journal of Food and Culture, named the 2012 Publication of the Year by the James Beard Foundation.