The World of Soy : A lively discussion of soy production and consumption 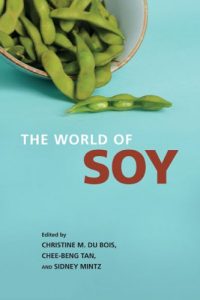 As the most ecologically efficient and economical source of complete protein in human food, soy is gradually attracting more use in the American diet for its nutritional and financial value. Derived from soybean plants–the leading export crop of the United States and the world’s most traded crop–soy produced for human consumption is part of a global enterprise affecting the likes of farmers, economists, dieticians, and grocery shoppers. An international group of expert food specialists–including an agricultural economist, an agricultural sociologist, a former Peace Corps development expert, and numerous food anthropologists and agricultural historians–discusses important issues central to soy production and consumption: genetically engineered soybeans, increasing soybean cultivation, soyfood marketing techniques, the use of soybeans as an important soil restorative, and the rendering of soybeans for human consumption.